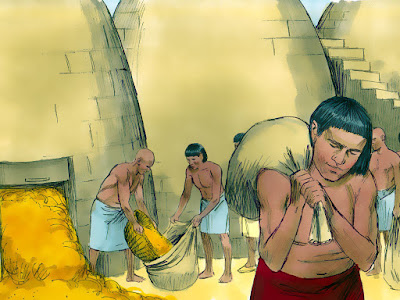 As I heard the story of Joseph once again in a Sunday morning sermon - there was one thing that fascinated me namely the storage of food for more than seven straight years. I always asked myself questions like, "How will the food not spoil if they harvested during the first year and it would go for 13 more years in the storage house?" The answer would be to dig through ancient Egyptian science and technology to know the methods of ancient food preservation.

Here's an interesting read from a blog called Stealth Armoured which may help unlock the mystery of how Joseph may have preserved grains for Egypt for the seven years of famine:


How did Ancient Egyptians preserve their food?

Ancient Egyptians employed a variety of methods for food preservation. Great silos were constructed to preserve grain for long periods of time. Fish, meat, vegetables and fruits were were preserved by drying and salting. Grains were fermented to create beer.

There is evidence that as early as 12,000 B.C., Egyptian tribespeople on the lower Nile dried fish and poultry using the hot desert sun. Areas with similar hot and dry climates found drying to be an effective method of preservation…Herodutus, writing in the fifth century B.C., describes how the Egyptians and their neighbors still dried fish in the sun and wind and then strored them for long periods.

…the Babylonians and Egyptians pickled fish such as sturgeon, salmon, and catfish, as well as poultry and geese. Sometimes salt was relatively easy to extract; in other parts it was more difficult.

Salt has been used to preserve fish since ancient times, possibly even before meat was cured. The early Mesopotamian civilizations relied on a staple diet of salt fish and barley proridge…Fish curing, depicted in the tombs of ancient Egypt, was so highly regarded that only temple officials were entrusted with the knowledge of the art, and it is significant that the Egyptian word for fish preserving was the same as that used to denote the process of embalming the dead.

For thousands of years the survival and power of a tribe or country depended on its stocks in grain. Harvesting, processing, and storing grain stocks was of huge importance, and war was declared only after harvest…One of the earliest records of large-scale food preserving was in ancient Egypt, where it was enourmously important to create adequate stocks of dried grain to insure against the failure of the Nile to flood seasonally. Huge quantities of grain were stored in sealed silo, where they could be kept for several years if necessary. Records from 2600 B.C. show that the annual flooding of the Nile produced surpluses of grain that were stored and kept to feed builders of irrigation schemes and pyramid tombs. The Great Pyramid of Cheops at Giza was built around 2900 B.C. by slaves fed with stores of grain and chickpeas, onions, and garlic.


Great silos were made to preserve grain for a very long time. The reference would suggest that seven years of the Nile overflooding was soon followed by seven years of the Nile not overflooding. The grains were dried and placed in huge airtight silos. Air would give room for pests, mold and other destroyers but an airtight one would not only prevent entry but also kill if any entered. I guess they had a very meticulous method to ensure no pest entered. I would assume that Joseph probably spent seven years supervising a grain drying operation along with other food preservation methods such as fish and poultry behind the scenes. Drying the grains together with airtight silos would have been the answer to how Joseph stored that much food in seven years of plenty in preparation for seven years of famine.

Though judging the fact that the account took place in Genesis - it's probable that Joseph introduced the method of food drying. He probably had a talk with the incumbent pharaoh during his time about sun drying and making airtight silos or not. Regardless, one can take a look at the marvelous account of history and sciences to prove that the Bible is, in fact, the Word of God.
history science